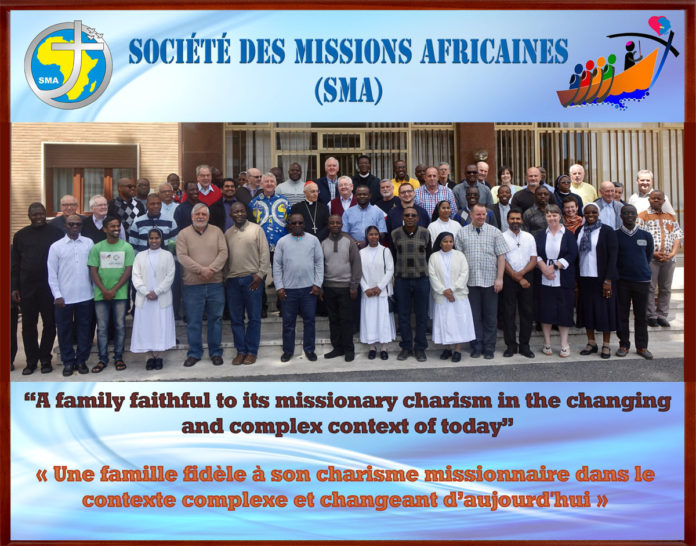 The 21st General Assembly opened in Rome this Tuesday, April 30. The previous day, each delegate introduced himself/herself with a symbolic object. Many small flags remind us that the SMA has flourished in four different continents. It was a great joy for all to meet after sometime, and for others after many years of separation. There are 46 participants including two lay representatives, including our own Laity coordinator, Dympa Mallon.

The opening ceremony was colorful, where young and old are happy to take part in this event for the Society of African Missions (SMA). For the first time, in the history of SMA, 50% of the members of this Assembly are participating for the first time in a General Assembly.

The Society of African Missions usually hold a general assembly every six years. It allows us to reflect on the orientations taken and the fidelity to the congregation’s commitment to its charism, it is also the time of the election of a new council around a new superior general.

On Tuesday, the meeting began with an invocation to the Holy Spirit. Delegates entered the procession singing the “Veni Creator” with the same intensity and emotion as on the day of priestly ordination. The room and the people were blessed by the mixed waters brought by each of the participants. They also had with them a little earth or sand from their place of mission, these served as a base for the candle whose flame symbolizes the good news announced to the nations.

In his opening address, the Superior General, Fr. Fachtna O’Driscoll, welcomed each of the delegates and invited them to embark on a new adventure with the theme for this assembly:

“A family faithful to its missionary charism in the changing and complex context of today.”

“Another challenge will be to maintain or even strengthen our Charism to be missionaries “Ad Extra”, “Ad Gentes” and “Ad Vitam.” I hope we can strengthen our “apostolic” zeal. I am grateful to Father Bruno Semplicio, formerly Postulator of the Founder’s Cause, who in recent years has regularly drawn our attention to the fact that we are called by our Founder to “do just like the Apostles”. Keeping this goal constantly in mind will help us to become and decide how we live our mission with the greatest fidelity today. I have no doubt that this will include ways to increase the role of the laity in order to improve our response and to give full power to the laity to fully exercise their baptismal vocation to the mission.”

Cardinal Filoni, Prefect of the Congregation for the Evangelization of Peoples, joined the assembly to preside at the opening mass. A delegation of the Sisters of Our Lady of the Apostles accompanied by their new Superior General joined the assembly as well as the community of fathers and sisters from the African Missions Generalate.

In his homily, the cardinal placed the assembly under the protection of Mary, the mother of Jesus:

“I entrust your General Assembly to the Virgin Mary, Our Lady of the Missions; May you, through her intercession, initiate a new missionary impulse taking as reference the merciful face of Christ, to go to the peripheries not only geographical but also of existence in order to testify to the saving will of God, remaining faithful to your missionary charism in the current changing and complex context of today, which is the theme of this Assembly that you will begin. I join you in making this Missionary Society for Africa rediscover renewed enthusiasm and joy. God bless you. Thank you for your service to the Church.”

The day continued with practical information to make life easier for delegates and to provide everyone with the necessary tools for effective assembly work.

To view the opening address by our Superior General, Fr. Fachtna O’Driscoll SMA, please click on the image below. Updates on proceedings throughout the General Assembly can be accessed by clicking here.