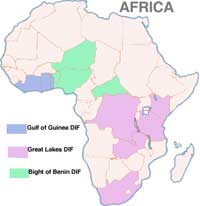 The Society of African Missions has very deep roots in South Africa. The first SMA priests (from France) went on mission there in 1873, just seventeen years after the foundation of the Society. The following year they were entrusted with the Prefecture of Central Cape. They established five mission stations: Mossel Bay, Georgetown, Oudtshoorn, Pella and Jamestown (in St Helena). However, after some years the mission failed and the priests were reassigned to other parts of the continent.

When the French missionaries first arrived they were received by an Irish-born priest, Fr James O’Haire, acting on behalf of Bishop John Leonard. Fr O’Haire, educated at All Hallows College in Dublin, was impressed by these young enthusiastic missionaries. “A good relationship was established, and in discussions during the next few years O’Haire suggested to the French that they would best meet the demands of their English-speaking missions by recruiting Irish students for the society.” (The Irish Missionary Movement, Dr Edmund Hogan SMA, Dublin, 1990, page 78)

In general, the “Irish priests who went abroad did not go to preach the Good News to the pagans of Africa or Asia, but to minister to their emigrant compatriots. To say that they were not missionaries is not to belittle their vocation or their pastoral achievements. It can scarcely be doubted that many of these Irish priests did have the capacity to be missionaries to the pagans.” (page 284, Mission to West Africa, volume 1, Patrick Gantly SMA, Rome, 1991) Little did the first SMA missionaries TO Africa (in the 1870’s) realise that a little over 100 years later the SMA would have missionaries FROM Africa going to all parts of the continent. Our map shows the three SMA African Districts-in-formation: Gulf of Guinea, Bight of Benin and Great Lakes.

When O’Haire first went to South Africa, in 1868, he ministered to the Hottentot (Khoikhoi) community so he was open to reach out to the local people and preach the Good News. He saw the need “to start the movement in favour of the pagan mission, to battle against the strong tide that was running against any mission other than the quasi-chaplaincy ministry to Irish settlers in Britain, the United States and elsewhere” (ibid). This was not shared by many others in the clergy there, including the bishops. He returned to Ireland and began ‘recruiting’ for the SMA to provide such missionaries. It was not easy to recruit candidates in Ireland either as the French origin of the SMA made them ‘suspect’ among many of the Irish clergy. However, O’Haire persevered in his efforts. Those he recruited went to Lyons to be trained and thus began the extension of the SMA beyond its French roots.

In 1882 the SMA handed over their missions to the Holy Ghost Congregation (CSSp) and left South Africa. It brought to a close a short chapter in the life of the Society. Or did it?

One hundred and two years later Fathers Colum McKeogh and Vincent Brennan re-established the SMA presence in South Africa. They came to staff St Clement’s parish, Modimong in the diocese of Rustenburg, in response to an invitation from Bishop Hallett CSsR. Many more SMA’s (from Ireland, Ivory Coast, Nigeria and Togo) were to follow them. Today, the SMA team in the country numbers 16. Fr McKeogh has since gone to his eternal reward and Fr Brennan, thank God, is still working in Rustenburg diocese. Though most of our missionaries are still working in Rustenburg, we also have missionaries in Pretoria and Johannesburg.

The SMA presence in Pretoria Archdiocese began with the appointments of Fr Con Murphy and Fr Kevin O’Gorman to teach at the two seminaries then in existence in the Archdiocese of Pretoria. After some language preparation, Fr Murphy went to St. John Vianney’s Major Seminary in Pretoria in January 1991 until June 1996 when he was asked to join the SMA staff at the SMA House of Studies in Nairobi, Kenya where he served until 2005. From 2005 until 2012 he was in fulltime pastoral work at Our Lady Queen of Peace parish in Embulbul, in the diocese of Ngong. After a Sabbatical programme, he is now Curate at St Joseph’s SMA Parish, Wilton, Cork.

In 1991, Fr O’Gorman began teaching at the Philosophy seminaries at Hammenskraal and Garsfontein. In 1996, when all seminary training was moved to St John Vianney’s, Fr O’Gorman joined the staff there. That same year, he was elected as SMA Regional Superior for South Africa. He continued to teach at St John Vianney’s until 1999.

In 1993/4 Archbishop George Daniel and Fr John McGuinness (Belfast) paid a visit to the SMA Provincial House in Cork and requested priests for the Archdiocese. In response to this request Fr Michael Nohilly and Fr Eddie Deeney were appointed in October 1994 and, after language learning in Rustenburg, they were assigned to the parish of Marapyane about 150 kms north of Pretoria at Easter 1995. A little over two years later the Archbishop, anxious to develop an additional parish in the Montana area of the city, asked the SMA to look at possibilities for such a development.

The first Mass was said on the verandah of the house by Archbishop Daniels with Fr. Eddie and Fr. Kevin concelebrating for a congregation of about one hundred. When the winter set in a garage at the back of the house was turned into a temporary church. The man who owned the plot left behind a large number of a rare breed of chickens. Children had great fun chasing them after Mass. One little girl was heard to say to her friend “I go to the chicken church”. One of the first achievements of the new parish was the completion of a substantial Hall for parish use. Our photo shows the congregation at one of the two Sunday Masses.

In 2000, Fr Deeney handed over to the present Parish Priest, Fr Michael O’Leary. He is now based at the African Missions in Dromantine, Co Down. Fr O’Gorman continued in his role as Regional Superior and in November 2001 he completed his term of office and left Montana parish. He is now Lecturer in Moral Theology at St Patrick’s College, Maynooth.

Over the years it has grown into a vibrant multicultural parish with increasing numbers. One of the challenges the parishioners have taken up is to reach out to others in need. The donation to MSF is just one example of same.

There are at least twelve different cultures represented in the parish and, in April 2013, an International Fun Day will help raise funds for the International Red Cross. Each group will share their particular cultural traditions and food.

In recent years Fr. Michael has transformed the parish hall into a beautiful church and has put his expertise in the area of catechetics to good use in the parish.