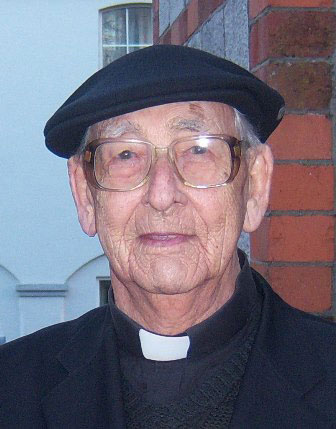 The Society of African Missions in Ireland is mourning the death of its most senior member and priest, Fr Liam O’Callaghan, at the age of 95 years of age. Fr Liam died peacefully on Saturday, 5 April 2014, in St Theresa’s Nursing Centre at the African Missions, Blackrock Road, Cork with Fr Colum O’Shea, Fr Eddie O’Connor and some of the Nusing staff gathered around him.

Liam O’Callaghan was the youngest of four children born to William and Catherine O’Callaghan (née Mahoney) in Upton, Co Cork.

He was baptised in Innishannon Parish and confirmed in St Finbarr’s West, Cork City. His brother Denis, an SMA seminarian, was drowned in an accident trying to save a fellow seminarian in 1929. He is buried in the same cemetery as Fr Liam will be next Monday, 7 April. His other brother, Jim, and only sister Breeda also predeceased him. In childhood the family moved from Upton to Bishopstown and shortly thereafter came to live in the Lodge of the African Missions College at Wilton.

Liam did his primary schooling at Glasheen National School and then went on to the Christian Brothers (Sullivan’s Quay) and the Presentation Brothers (Western Road). Like his older brother Liam also wanted to be a missionary. Living in the shadow of the African Missions College he often met with different priests and heard of their lives in Africa. In particular he got to know Fr Maurice Slattery, a Kerryman, who became Provincial and later SMA Superior General. Liam also served Mass for Fr Stephen Kyne, who had served as the first Prefect Apostolic of Liberia (1906) and later appointed as the first Provincial Superior of the Irish Province (1912). With such influences on him Liam decided to enter the SMA Novitiate in Cloughballymore, Co Galway in 1936. He became a member of the Society on 29 June 1938 and then travelled north to the African Missions Major seminary at Dromantine near Newry, Co Down where he completed his studies. He became a permanent SMA member on 14 June 1941 and was ordained to the priesthood in the Cathedral of Saints Patrick & Colman, Newry by Bishop Edward Mulhern on 14 December 1941, six days short of his 23rd birthday. Due to the disruption caused by the Second World War Fr Liam and his classmates were unable to travel (by boat from Liverpool) to Nigeria until 1943. They were sent home to their families until a berth became available.

They embarked on Ash Wednesday 1943 and arrived at Apapa (Lagos) on 6 May, after spending six weeks in Sierra Leone, where Bishop de Brésillac, SMA Founder, had died after just six weeks in Africa (25 June 1856). When he eventually arrived in Nigeria he proceeded by train overland to Kaduna where he was to serve for thirty-seven years. The Prefecture of Kaduna covered 200,000 sq kms, more than twice the size of Ireland.

On left a bearded Fr Liam with a Nigerian diocesan priest and, below, Fr Liam baptising a baby in Kano [1945].

His first appointment was to Fr Michael Moorehead SMA and when Fr Liam retired to Wilton (1993) he found Fr Moorehead there before him! No doubt they had many happy memories to discuss.

The main mission stations of Kano, Zaria, Kaduna and Minna catered almost entirely for a population of Southern Catholics while Argungu in Sokoto Province, Gawu and Masuga in Niger Province, were opened with hopes of evangelising the rural people. In Liam’s first tour he worked in 5 parishes, including Masuga and Argungu, and spent most of his second tour in Masuga.

In Minna Fr Liam had a Mission Boy named Christopher Abba. He sent him to school and eventually he was to see a young Father Abba becoming the first bishop of Minna diocese when it was created in 1973. Bishop Abba was later transferred to serve as Bishop of Yola. He died in 2010. May he welcome his former ‘Fada’ into the joy of eternal life.

Six of the parishes where Fr Liam served in this vast Prefecture are now dioceses in their own right: Kaduna [Archdiocese], Kano, Kontagora [Vicariate], Minna, Sokoto, Zaria. Surely God has blest the efforts of Fr Liam and many other missionaries as well as local catechists and priests in this part of His Vineyard.

The homily of Fr Eddie O’Connor SMA when the Society celebrated Liam’s Platinum Jubilee (70 years as a priest) gives an excellent description of Fr Liam’s missionary life in Africa. It is an excellent account of his years in Nigeria and the faith which underpinned it. Read Fr Liam’s life in Nigeria. Fr Liam was only the second Irish SMA to reach 70 years as a priest; the other was the late Bishop Patrick J Kelly (from Co Galway). In 1943, shortly after arriving in Kaduna, Fr Liam attended the annual Priest’s Retreat.
He is on the extreme right, back row. On 8 February 1959 a classmate of Fr Liam’s, Fr Richard Finn, was ordained Bishop of Ibadan and he travelled south for the ceremony. He is pictured on the extreme left in the front row. Ill health in the late 70’s eventually led Liam to return home finally from Africa. In 1989, after a time spent recovering his health, he went to work in Knockaderry parish in the diocese of Limerick where he spent 13 very happy years. He was greatly appreciated by the people of Cloncogh and Knockaderry for his diligent and faithful service.

From 1993 – 2013 Fr Liam lived in active retirement in the African Missions, Wilton where his ‘green fingers’ (even remarked upon in reports from his student days) helped to beautify the grounds.

Fr Liam loved a smoke and could often be found having a few puffs in the conservatory in Blackrock Road, right up to his final weeks. On one occasion when asked for a light he produced four lighters from his pockets! (pictured)

In 2013 he crossed the city to live in our Nursing Centre in Blackrock Road and right up to this week was attending the 10.30am Mass each day and going to the Dining room for his meals. So, after a long life, well-lived and enjoyed, Fr Liam has gone to his eternal reward.